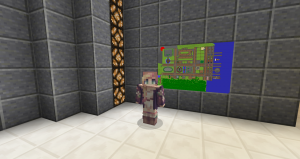 A huge part of Minecraft is building. A lot of the time, it’s about building a structure just to survive. But other times, it’s about taking your creation to a whole other level. Let’s learn more about building extravagant structures from our counselor builder extraordinaire, Cherry Jung.

Cherry Jung, known on our serves as VIVIDfiasco, is from Wisconsin. She’s currently a fifth year senior, or super senior as she put it, at the University of Wisconsin–Milwaukee studying healthcare administration and nursing.

Cherry became interested in Minecraft after watching a speed building video on YouTube. Speed building videos show monster-sized creations in Minecraft in fast-forward. She and two friends built their own server and began building. After testing what happens when you detonate a 1000 x 1000 TnT block in the game (hint, it doesn’t go well), she hopped around on different servers and played solo. She really enjoys creative mode where she can “have access to all the block types and be able to build whatever pops into mind that day.”

Cherry learned about Connected Camps via another one of our counselors. She was interested in becoming a counselor, because she loves the proud feeling she gets when her kids succeed in crafting and building whatever their hearts desire. She also enjoys sharing her building knowledge and helping kids play the game she loves.

She doesn’t just build every day structures. She’s built an “Asian Fantasy Shrine with a World Tree and an underground temple underneath that tree.” Her first home was “a 10 x 10 panic dirt room” since it was getting dark fast and there were a lot of scary things nearby. She’s “revamped a jungle cave into a jungle luxury home.” On our servers, she’s already built a Volcano Dungeon Crawler, player housing, and parts of a Bazaar.

Some of her creations have taken a really long time to build. The Asian Fantasy Shine was her most intricate creation and it took over two weeks to finish. But she says, a lot of that time was her “placing a block down and [then] wanting something else.”

Cherry says “one really important aspect for large scale builds is to be flexible. When you imagine it in your head, it’s a little different in game.” She says one thing that can help with building large-scale structures is to have a “pretty clear picture in your head and maybe some reference photos to fall back on if you forget.” Before Cherry kicks off her creations, she likes to “research the era of those building types and see what were popular design choices.”

If she could build one more thing on Minecraft, she’d build a giant castle town with the campers. Because “it’s large scale enough that it’d take a while” and keep her “challenged, but also inclusive enough to let others add their own charm and take to the idea.” People could also enjoy it “years down the line as they walk through the village and visit the castle – perhaps even adding onto it and expanding it as they see fit.”

If you love building in Minecraft, check out our Architecture Camp.

View all posts by Leigh Ranck →