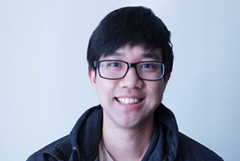 What was the initial appeal of Minecraft?
Minecraft originally appealed to me as a platform in which players could create their own stories to share with their friends. I played the game since Alpha, and even its humble beginnings showed rich opportunities for player created stories and experiences to be the core part of the sandbox game.
How do you spend your free time?
Playing lots of other games and watching people play games on Twitch.tv. Currently I like playing games with a strong narrative focus, but I like watching people play games that are very open ended and seeing what kind of stories they come up with. I watch a lot of competitive esports games too!
What was your biggest Minecraft challenge and how did you figure it out?
Figuring out ComputerCraft for the first time was a huge challenge since I also had to help teach the concept to people who were completely new to programming. Learning ComputerCraft wasn’t actually too hard, but taking a step back and learning how to explain the deeper programming concepts was a challenge.

Overcoming that challenge took a lot of patience and iteration for the people who were eagerly trying to grasp abstract programming concepts.

How would your friends describe you?

All my friends play and watch a lot of games like me so they may describe me as just a normal person.

What is your perfect pizza?
Pineapple toppings.
What is your favorite thing about Minecraft?
I really enjoy tinkering with the Redstone system, which is the game’s version of a circuit system. Seeing players create computers in the game from scratch is mindblowing. I never get tired of checking out what players are creating with redstone.
What was your favorite part about camp last year?
It was really astonishing to see the magnitude of creations that the campers built last year in such a short amount of time. Once in a while we revisit that world and we’re always discovering new things a year later.
What teacher in school made the biggest impact on you?

In High School, I worked on the school newspaper editing the Opinions section. Our adviser Mr. Atchley gave us a lot of guidance but also a lot of freedom to do what we want. It gave us a space to experiment, and even fail, but still made it a point to always learn from failure. It taught me that some of the most valuable learning occurs in a space where people have the freedom to fall flat on their face.